Archangel Michael has so many names! 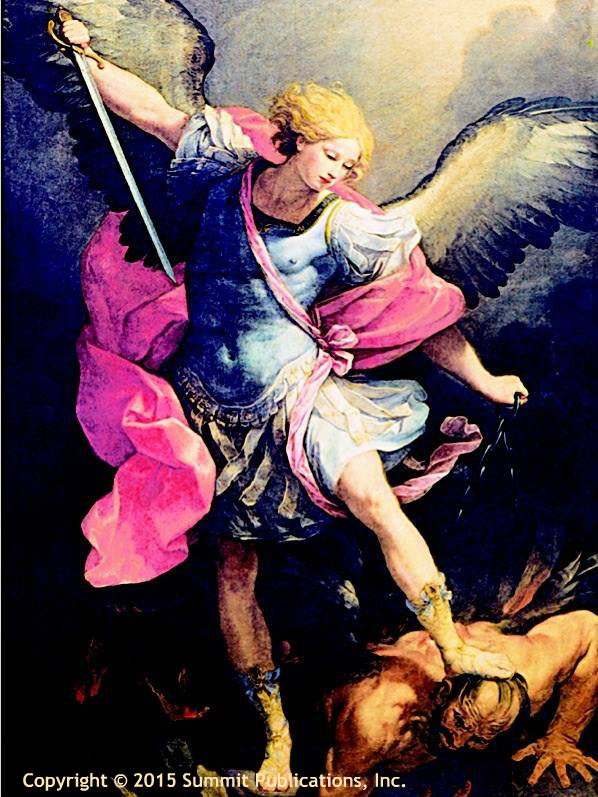 Here are a few of Archangel Michael's titles. He is the Prince of the Archangels and of the Angelic Hosts, the Angel of Deliverance and Defender of the Faith. He's referred to as Saint Michael the Archangel and Angel of the Lord. Have you seen those Christian churches called St. Michael? Well they are named after this guy. His name means 'who is like God'.

All archangels have a 'line of work' as it were, called a ray of God, and Michael is of the first ray, which is the blue ray of power, protection, faith and the will of God.

He will protect you if you ask him. However it's easier for him to help instantly if you have created a momentum of decrees and prayers to him daily.

He came to my rescue one day when I (Patricia) visited a person in the course of my work. I had an appointment with the lady of the house, but it seemed she had forgotten I was coming. She had left her large unfriendly dog in the front garden.

"Archangel Michael, Help me! Help me! Help me!" I repeated as I gingerly opened the gate. The dog attached itself to my coat-clad arm. I kept repeating the call as we made our way slowly towards the front door. I felt it was not going to bite me, but wanted to stay attached. I eventually rang the doorbell.

The owner was astounded to see me there at the door. This dog had been abused in the past and had a reputation of attacking people, females in particular, and she was amazed it had not hurt me.

You can read great real life stories of how Michael has helped and rescued people from all sorts of situations in Elizabeth Clare Prophet's book
I Am Your Guard: How Archangel Michael Can Protect You. It's well worth a look if you have an interest in this archangel and his protective powers.

Has Michael the Archangl saved you once or twice? Click here to read other people's stories or share yours!

The Boys in Blue

Saint Michael the Archangel, along with his legions of blue lightning angels, defend the children of God from the dark forces. They are all clad in blue armor and carry shields and swords of blue flame. I like to think the sword may look similar to the one Luke Skywalker uses in the film Star Wars, but more magnificent.

Blue is the color of protection. St Michael is the sponsor of the police force - our "thin blue line." Do you think it is a coincidence that emergency vehicles have blue flashing lights?

His divine compliment is the Archeia Faith (a female archangel, if you will) and she works with him in helping to free people from the negative facets of life.

He has a spiritual retreat in the etheric octave above the Canadian Rockies at Banff, near Lake Louise. He also has a focus of light above central Europe.

If you want to feel closer to Archangel Michael you can play his keynote music, which is 'The Navy Hymn' ('Eternal Father, Strong to Save').

Why not give the morning and evening prayers to invoke his protection found here?